I'm in the mood to write and with an exciting trip planned to Chicago (Cubbies home opener!) later this week I thought I would share a few fun things to do around the city!

My fiance and I have been so lucky to have shared so many awesome experiences in Chicago and sometimes feel like we've done everything there is to do and search for something new and exciting!

SPORTS
DIE.HARD.CUBS.FAN. and SO proud of it! Don't hate on 1908! One of the best things we've done in Chicago involves The Cubs and sports in General!

Obviously, going to the game itself is an exciting experience.  We've been to about 15 games together in the 6 years we've been dating and every single time we've sat in The Bleachers. Yes, they're so important they get capitalized :).  Whyy The Bleachers?  Well, first off you can get tickets pretty cheap from StubHub.  We've found that the closer it is to the game, the cheaper the tickets on the site.  It's other people trying to sell their tickets so as it gets closer, they just want to get rid of their ticket rather than make a giant profit. We once scored Cub/Cardinal tickets from StubHub for $15 a person for Bleacher seats!  Another great thing about the beloved Bleachers is that the seating is first come first serve.  NO ASSIGNED SEATS AT ALL!!  We've always sat in the first 5 rows!  You simply get in line about 30-45 minutes before The Bleachers open (1 hour before the game) and then once you're in the stadium you pick where you want to sit! You can even decide if you want Left, Center or Right outfield! 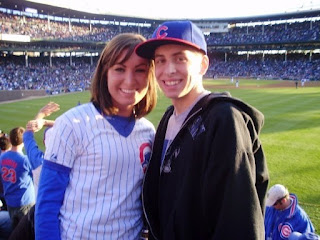 I will say, most people who sit in The Bleachers are adults so I definitely don't recommend it for family seating.  Unless you like your children being exposed to drunk Bleacher Bums :)

Another must is a Wrigley Field Tour!
For $25 a ticket we got to experience Wrigley Field in an unimaginable way.. we learned the history of the field while visiting the locker rooms (can I say Zambrano had a photo of Megan Fox in his locker?!) dugouts, broadcasting booths, Bleachers, and even got to STEP.FOOT.ON.THE.FIELD! It's really a must for any sports fan! 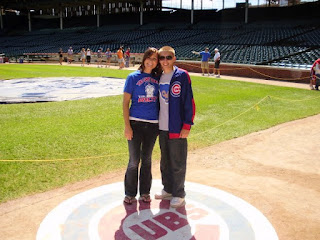 just hanging out on the field & in the dugout! 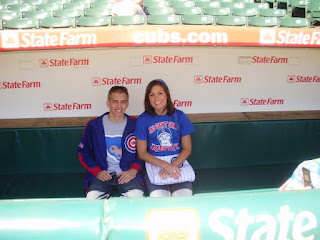 We've also seen The Bulls and Blackhawks at The United Center, The Sox vs Cubs at US Cellular Field and The Bears vs Vikings at Soldier Field.  We've also bought tickets to all these events from StubHub 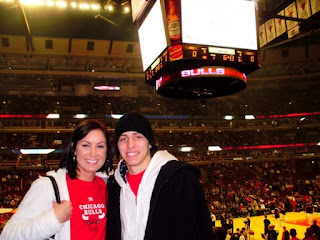 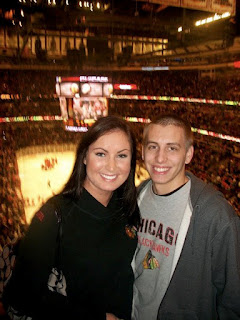 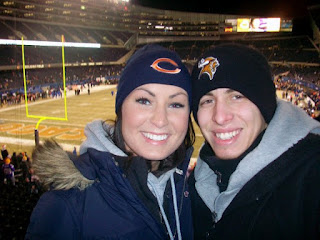 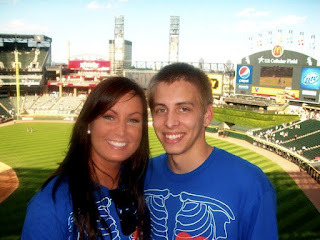 If you are a sports lover be sure to check for charity events sponsored by pro sports teams or players.  We came across a Chicago Cub charity event and purchased tickets for $100 a piece to attend with all proceeds going to a Cubs charity.  At the event we had dinner, received autographs and were able to meet and get photos with Cubs players!  There was also a silent auction and autograph balls for purchase with proceeds again, going to charity.  We got to meet players, get autographs and pictures all while donating to charity!! Win-Win! 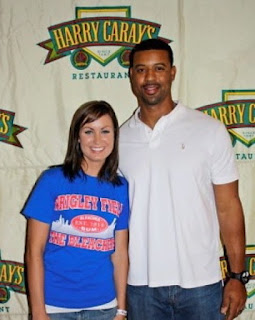 Me with Derek Lee! I think he winked at me with both eyes.. or maybe that was just a blink but still! And my fiance and I with the legendary Ernie Banks the a ball he autographed! 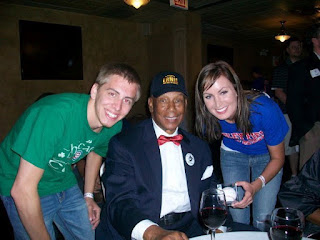 Another SUPER FUN thing we've experienced is a Segway Tour! 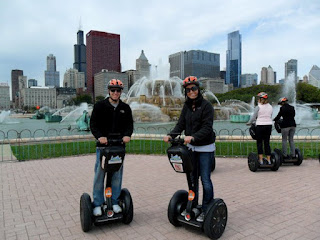 You will feel like the biggest.dork.in.the.world. when zipping around on a Segway wearing those super cool helmets but it is so worth it! I can't remember how much it was but it couldn't have been too terribly expensive and whatever the cost, it was so fun! We glided (because that's what it feels like) by Lake Michigan and around Grant Park.  It was a little tricky at first learning how to ride on one but the instructors were super helpful and once you got used to it, it was fairly easy.  One of my more favorite things we've done!
Museums! I wouldn't normally visit museums but since we were looking for new things to do we decided to visit the museums in Chicago.  We've been to the Field Museum, Science and Natural History Museum, Art History Museum and the Shedd Aquarium.  As far as I know, we only have the Planetarium left to visit! 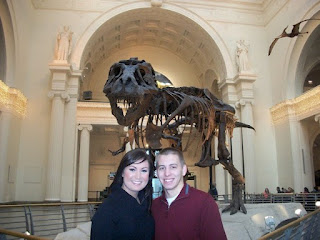 All had cool exhibits but we both like learning and seeing new things so deciding on which museum to visit depends on your personality :) The photo above is when we saw Sue the T-Rex at The Field Museum which was very cool!
Dinner Cruise!
Ohh la la! Every once in a while it's nice to get all gussied up and enjoy a fancy, romantic night out so we treated ourselves to a wonderful dinner cruise aboard the Mystic Blue Cruise liner. We were entertained with a live band, a full dinner and dessert buffet, dancing and a firework show from Navy Pier while cruising on Lake Michigan for 3 hours.  I believe the price was a little over $100/person but since it was a treat and not a usual event it was worth it and a great memory! 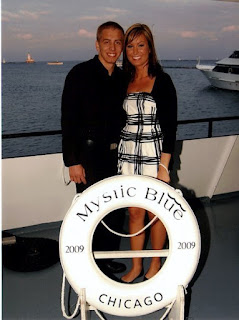 Dining. We have a rule that anytime we go anywhere for vacation or a weekend trip we do not eat at any place we could at home and boy oh boy does Chicago have some amazing restaurants!! My top two favorites are:  Pizano's and Gino's East.  Both are pizza/Italian restaurants and oh so good! I'm a sucker for Chicago style pizza so I can't leave the city without having some!  The Signature Room at the John Hancock Building is also a fabulous place to dine.  It's located on the 95th floor and has breath taking views of the city and delicious food.  We ate there for dinner which was 'fancy' dress code as I call it.  I wore a dress, the fiance wore a suit.  Our dinner was over $200 which we had planned for and expected after looking over the online menu.  We also ate there for a weekend brunch which was a normal business casual dress and much more affordable.  We ate the brunch buffet and the bill was about $30 for the two of us.  I actually liked the food from the brunch better but the dinner was a cool experience.  I don't think we'll ever have a dinner that fancy again :) 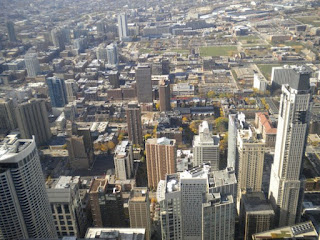 View of the city from our brunch at The Signature Room!
Other places we've eaten and enjoyed are: Ed Debevick's, House of Blues, Giordanos, Billy Goat Tavern, Harry Carey's Steak House, and Al's #1 Italian Beef.
Chicago Chocolate Walking Tour! Nearly 3 hours of walking around Chicago taste testing chocolate from the finest bakeries and chocolatiers. Need I say more?  I scored the tickets off of Groupon for $40!  If you love chocolate then your life isn't complete until you experience this!
Annual Chicago Auto Show! I don't know a dang thing about cars other than some of them are so pretty and I like the way they look.  That's about it.  My fiance likes the Auto Show to see all the new cars and everything they come loaded with, I like just looking at the pretty cars!  There are so many cars and so many people it's almost overwhelming but it's pretty cheap (less than $15 a person- but I can't remember the exact price) that it makes a great day experience. 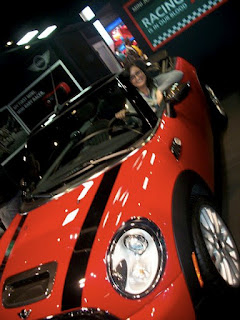 Ice Skating & Carriage Rides<3.  Is there a more romantic combination?! The answer is no, there's not! Each winter Millennium Park transforms into a public ice skating rink! I had never ice skated in my life but it actually wasn't too bad! It does cost, but for the fun experience it was worth it and it wasn't very expensive that I can remember.  There are also horse and carriages rides available during certain days and times! Ice skating and then a carriage ride in downtown Chicago?! I think that's what makes movies.
My fiance and I both love the city of Chicago and have scoped out so many fun things to do that hopefully you'll be able to experience some fun things as well!  Feel free to share the fun experiences you've had in Chicago!
Posted by Amanda Cervantez at 12:32 AM